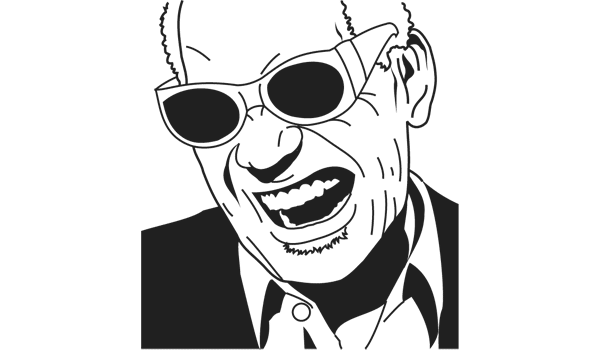 “A life is not important except in the impact it has on other lives.”

Ray Charles lost his younger brother when he was five years old, shortly after, presumably due to untreated glaucoma Ray had completely lost his eye sight by age seven. Yet his mother did not allow him to wallow in self pity. As the blindness was gradual she began showing Ray how he could do things himself. With an interest in music since the age of three, and a little prompting from a café owner Ray climbed the rungs on the ladder to become one of the world's great musicians.

In an interview later in Ray's life, he spoke enthusiastically to the man who helped him develop his love of music into an inspiration.

'Wiley Pittman, he was a cat. I mean, if it hadn't been for him, I don't think I'd be a musician today.

We lived next door to him. He had a little café, a general store, and he had a piano in there. Every afternoon around 2:00 p.m., 3:00 p.m., he'd start to practice. I was 3 years old and–I don't know why I loved him, I can't explain that—but any time he'd start to practicing and playing that boogie woogie—I loved that boogie woogie sound—I would stop playing as a child, I didn't care who was out there in the yard, my buddies, or whoever, I would leave them, and go inside and sit by him and listen to him play.

From time to time, I'd start hittin' the keys with my whole fists and finally he would say to me, 'Look kid, you don't hit the keys with your whole fist like this (demonstrates), if you like music so much,' and he knew how much I liked music because I'd stop everything I was doing and listen to him.

So he started to teach me how to play little melodies with one finger. And, of course, I realize today that he could've said, 'Kid, get away from me, can't you see I'm practicing?'

But he didn't. He took the time. Somehow he knew in his heart, this kid loves music so much, I'm going to do whatever I can to help him learn how to play.

A man named Wiley Pittman, relatively unknown to the world, inspired greatness and a love for music for generations on. It was his simple gesture to a three year old child that helped change the world of music. At the time he had no idea of his impact.

Imagine the impact you may have on others.