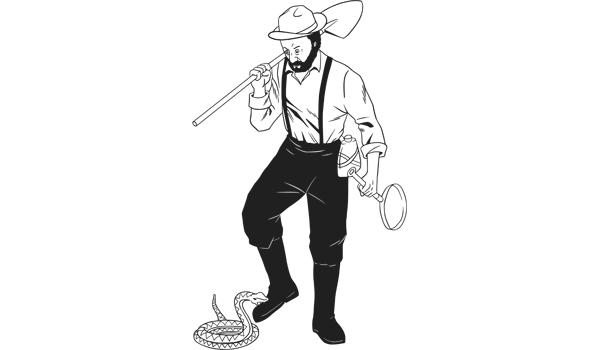 “Trusting our intuition often saves us from disaster.”

The most common snake in Arizona is the Western Diamond Back Rattlesnake. It can reach to over 7 feet in length and bites hundreds of people every year in the United States. It holds such an intimidating presence in the mind of humans that it has become the symbol of the American Southwest. Where other snakes may run and hide under a stone or in a crevice, the Western Diamond back will stand its ground rattling fiercely and snapping its venomous fangs.

An old prospector was walking along a dusty trail in Arizona's Superstition mountains when he sat down on a rock alongside a small crevice. He had no more water and knew that as the sun rose directly above him he would certainly die of dehydration. His only hope was to reach the water hole he knew existed further up the trail.

As the prospector sat there he could hear the scratching sound of a snake somewhere nearby. He frantically jumped up and to his surprise saw a Western Diamond Back sliding along the side of his empty canteen. He couldn't just leave without that canteen, if so; he had no hope of making his way back to camp with enough water. So he took a step toward the snake, fearful of its long venomous fangs. Just as he reached for the jug the snake said, 'I'm an old snake and I need water. I can see by your canteen that you are heading to the water hole yourself. Can you carry me there?'

The prospector nearly laughed out loud and replied, 'But, you're a snake? If I pick you up you'll bite me.' The Diamond Back responds, 'I promise I will not bite you. I am old and I need your help.' The prospector was cautious and said, 'But you are still a snake.' Sadly, the Diamond Back says, 'I will not bite you. If you leave me here I will surely die without water.'

The prospector, aging himself felt guilty about leaving an animal to die. So he agreed to take the snake with him. He picked up the snake and hung it from his neck. He was terrified, but eventually he got used to the snake, and was able to ignore his fear of being bit.

When the prospector made it to the refreshingly clear water hole, he set the snake down on the ground. But, before he could walk away, the Rattler lunged back at the man and bit him in the foot. The man yelled, 'You promised not to bite me!' The snake turned to slither away toward the water hole and said as the prospector fell to his knees anticipating death, 'You knew what I was when you picked me up. What did you expect?'