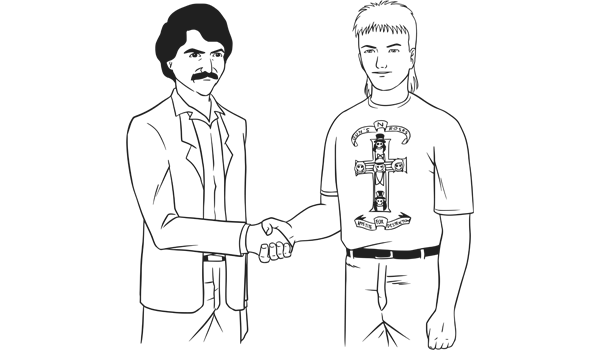 “If there is anything that a man can do well, I say let him do it. Give him a chance.”

On a recent visit home, my wife, kids and I were eating breakfast with my parents. Across the room, sat my old P.E. Teacher, Mr. Barbero.

Our first interaction was 15 years previous, and it was my first day of being a senior in high school. I was known for being disruptive and wild. Firsthand, he witnessed me embarrassing one of my teachers in front of the four other P.E. classes, including his. After I was kicked out of the gym, I was required to find and enroll in another class. Due to my history of disrespectful behavior, no other teacher wanted me in their class.

Mr. Barbero was in charge of the “Physical Conditioning” class that consisted of jogging and running. It was a favorite of the track and cross-country runners, and no one else. Having last run in elementary school I was intimidated, but Mr. Barbero's class was my last and final option.

I will never forget how I walked into his class the next morning with my transfer slip. I told Mr. Barbero that I was signing up for his class. He responded with something like, “Oh, no, there must be some type of mistake!” and laughed. He then asked, “Are you a runner?” I responded “Yep, I run from the police all the time!” He laughed and said, “I can imagine!”

He continued, “Mr. Boone, I will give you one chance, but if you ever disrespect me, my class or any other student, you will be kicked out without warning. And you will not be able to return to the class, and will receive an F. Do you understand?” I said that I did and he responded with a big smile and handshake, “Well, Mr. Boone, welcome to physical conditioning!”

Mr. Barbero expected us to run four-to-five days a week, three-to-six miles at a time. Being a long-distance runner himself, it was impossible to fake any run when he would run with you!

Mr. Barbero was one of the most encouraging teachers I ever had. He was very complimentary and would point out any accomplishment I achieved. From longer distances to faster mile times, he was there to announce it to everyone. He celebrated any milestone I reached and invited me to join the track team (although I declined). I enrolled in his class my second and last semester of high school.

As I approached his table at the restaurant Mr. Barbero didn't recognize me immediately. After introducing myself he pushed out a chair and asked me to join him. After a few minutes of small talk, I explained where I was living and what I was doing for a career. His expression on his face was one of excitement and shock! He mentioned that he always wondered what happened to me and joked about what prison I may have been incarcerated in.

I thanked him for giving me a chance by letting me enroll in his class and inspiring me to set and reach goals.

Many times in order for a person to succeed all he needs is an opportunity to do so.