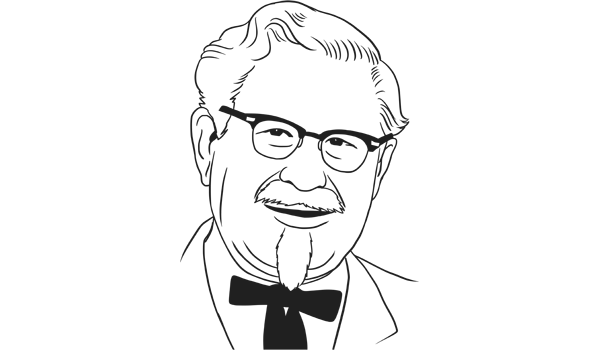 “It is never too late to be what you might have been.”

“Finger Lickin' Good!” We all know the expression, and almost everyone knows Colonel Sanders and his Kentucky Fried Chicken (KFC), but what most of us don't know is that Colonel Sanders didn't make it big in life until he was well into his sixties. At 65 years old the Colonel was broke!

At the age of fifteen Colonel Sanders was a streetcar conductor, and until forty he changed jobs many times—the army, railroad fireman, lawyer, operated a steamboat, and sold insurance, but it was his passion for food that delivered him to a small service station in Corbin, Kentucky at the age of forty. At the station he added a small dining room where he served and perfected his, “eleven herbs and spices.”

Soon his food became popular enough for him to open up a restaurant across from the service station. Two years later at the age of 62, Harland Sanders developed an idea to franchise his chicken recipe to restaurants across the country for a nickel per piece of chicken sold. As he traveled across country he found himself rejected over and over again until he finally awarded his first franchise to Pete Harmon of Salt Lake City, Utah.

Everything seemed to be heading in the right direction, until in 1955, at the age of 60, a new highway bypassed the town of Corbin, eventually putting Colonel Sanders out of business. Broke and on Social Security Harland Sanders was back out on the road trying to Franchise his chicken. His hard work paid off and by 1964 he sold his interest in KFC to investors for 2 million dollars.

Today, more than a billion of the Colonel's “finger lickin' good” chicken dinners are served annually in more than 80 countries and territories around the world.

Colonel Sanders proves that age is no barrier to success. When he was rejected he persisted, shot down again, he stood right back up. Success-It's never too late!