How To Boil A Bullfrog 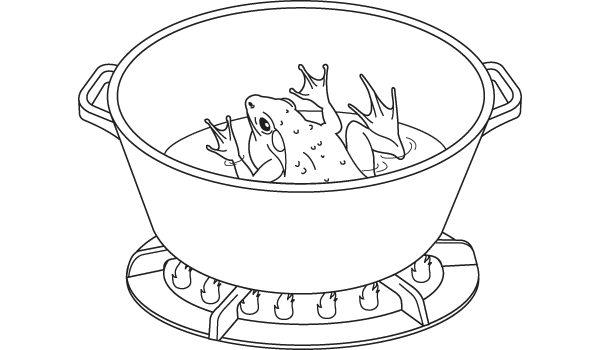 There are risks and costs to action. But they are far less than the long range risks of comfortable inaction.'

There once was a neurosurgeon who taught a few classed in medical school. He would occasionally include a bonus question on an exam: 'Is it possible to boil a bullfrog? Explain.' The students would respond that it was impossible, stating that once the bullfrog felt the heat from the boiling water its immediate reaction would be to jump out.

Following the exam, the professor would review the questions with his students. He would explain the somatic nervous system and the involuntary movements known as reflex arcs (when a nerve pathway connects directly to the spinal cord). He would diagram how, when a human touches a hot surface with its hand, for example, the automatic response is to immediately remove the hand from the hot surface. He would then ask the class if they still agreed that it is was impossible to boil a bullfrog. Unanimously the class would agree.

The professor responded letting the students know that they were all wrong. He would caution them about becoming bullfrogs once they graduated from medical school.

He would finish his lecture by stressing the importance of becoming too comfortable, in any situation. If so, little by little, it would become more and more dangerous until it was too late.