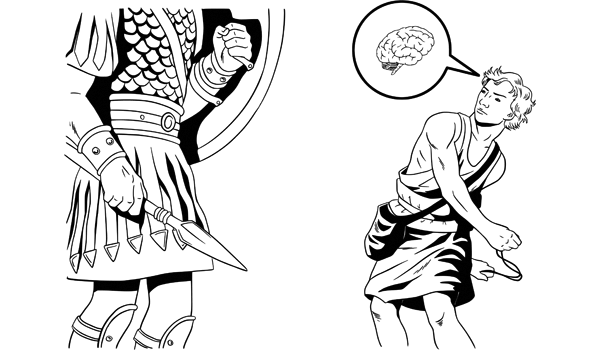 “It is a man's own mind, not his enemy or foe, that lures him to evil ways.”

There once was a giant who stood about six cubits and a span (about 9 feet) tall and weighed approximately 400 pounds. He wore a brass helmet and a brass coat of mail (chest plate) weighing five thousand shekels (125 – 200 lbs.). He wore brass greaves (shin pads) upon his legs, and a target of brass (shoulder pads). He held an iron spear in one hand with a spearhead that weighed six hundred shekels (15 – 25 lbs.) as he held a large metal shield in the other. He challenged all to fight him. He offered himself and his followers as servants to whoever could kill him. Everyone was afraid of him. He was a proven champion throughout the land!

A young righteous man volunteered to face the champion. Although his friends feared for his life, they placed a helmet on his head and chest plate over his small body. He grabbed a sword and shield, but didn't feel comfortable with all the armor, so he removed it. Instead, he placed five round stones (about the size of a golf ball) into a small bag hanging from one shoulder. He then placed a staff in one hand and a sling in his other.

The young man confronted the giant and the giant laughed and mocked him for his young age, small stature, and lack of armor. The young man grabbed a stone from his bag, placed it in his sling and slung the stone directly into the forehead of the giant. The giant fell to the ground, landing on his face. The young man then grabbed the giant's sword and smote his head.

For years, the righteous young man continued to live his life in a pleasing manner. However, as he grew older, and accumulated wealth, power and prestige, he faced a smaller, but a more powerful giant. The smaller giant started to defeat him as he started down a path of making one bad decision after another. One day, as he stood at the top of his house, he saw a woman bathing and sent his servants to bring her unto him. The smaller giant was finally able to conquer him when he was caught having the woman's husband murdered.

The average human brain weighs about four pounds. How is it that this young man was able to succeed in defeating a larger giant champion, but failed when challenged by his smaller, but giant mind? Sometimes it is life's smaller giants that are more difficult to overcome than the large.