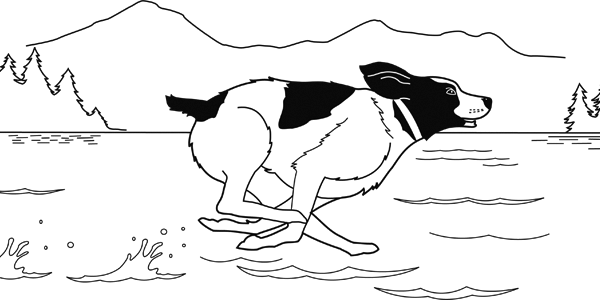 “Every day may not be good, but there's something good in every day.”

Two friends were talking one afternoon. One mentions to the other that he had seen something pretty amazing–a dog named 'Skipper' that was 'different from all others.' Curiosity got to him and he had to see what his friend was talking about. So, he went to the local lake to see if he could find the 'different' dog.

As he arrives to the lake, he sees a duck hunter. He states, 'I'm looking for Skipper!' The duck hunter points to a black and white dog sleeping next to the lake and says, 'She's right there.' The man shook his head with a smirk on his face thinking about how much time he wasted coming out to see the dog. 'I heard your dog is different from all others' he comments. 'She's a special dog. Watch this. . .'

The duck hunter picked up his loaded his gun, aimed and shot twice into a group of ducks flying overhead. A few of the ducks plummeted to the ground and the duck hunter looked at Skipper and said, 'Go git 'em girl!' Skipper leaped forward and darted for the lake. As she reached the lake, he watched the dog run across the water, its legs moving so fast it didn't fall in, and without missing a step it grabbed one of the ducks and ran back to shore.

The old duck hunter stretched his shoulders back, expecting some sort of compliment. When the man said nothing the duck hunter asked, 'So, did you see anything different about my dog?' The man responded, 'Yea, your dog can't swim!'

Some people will always find the negative in any situation–no matter how hard you try to show them the positive. Don't let negative people blind your ability to see a dog running on water!